Why Advocacy Campaigns Are Strategic

Anyone who has spent awhile in the nonprofit sector has struggled to find the most effective way to make change in the world. Some nonprofits exist to bring about change through legislative and legal advocacy and everything pivots around that goal. Others prefer a more on-the-pavement approach to helping their beneficiaries.

Whatever trench you choose, we firmly believe that any nonprofit can benefit from an advocacy campaign. At the end of the day, even the most dyed-in-the-wool street fighter will find advocacy campaigns a brilliant way to build their support base.

What Exactly is an Advocacy Campaign?

An advocacy campaign involves asking people to voice their opinion about the issues you work on, in a way that can make a real difference – like telling the CEO of a major supermarket chain to label GMOs in their store, or asking your local police department to change their policies to ensure unarmed suspects aren’t in danger of getting shot. 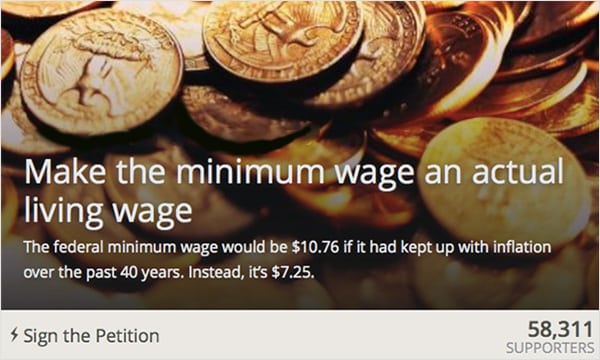 Because some political actions could put your organization’s 501(c)(3) status in jeopardy, we do recommend reading up on the IRS position on lobbying before launching a campaign. Whatever issue you’re working on, there are scores of ways you can ask people to take meaningful action.

The Real Impact of Advocacy Campaigns

Launching a successful advocacy campaign can boost your credibility, give people an easy opportunity to take action, and expand your community of supporters. That’s all gravy on top of the fact that it may also make a meaningful impact in the real world.

A few years back Snopes.com wrote an article that derided online advocacy campaigns as a politically anemic “slacktivist” hobby. These barbs brought a flood of evidence to the contrary from activists on the front line.

Randy Paynter, founder of Care2.com was one such advocate. To the charge that petitions are politically meaningless he answered, “Online petitions are powerful indicators of public opinion, often trigger subsequent media attention, provide ammunition to nonprofit organizations and lobbyists, and can fast track an issue while others languish.”

He went on to cite a study that shows that someone who signs a petition is seven times more likely to donate to the originating nonprofit than those who didn’t sign. In his own experience, he saw how petition signing acts as a “gateway drug” to greater civic engagement.

Take this example from the Organic Consumers Association. They used their entire online mobilization apparatus (website, social media and email – backed by Salsa) to ask people to sign a petition to the National Organic Standards Board (NOSB) advocating that apples and pears labeled “organic” not contain antibiotics.

Organic apple and pear growers argued that they needed the drug to treat fire blight, a bacterial disease that kills the shoots of trees. But there are other ways to control fire blight that don’t involve the use of antibiotics. Dozens of European-Union-compliant organic orchardists in the Pacific Northwest have successfully used a systems approach to fire blight control, sans antibiotics, so that they can seel their produce to the E.U. 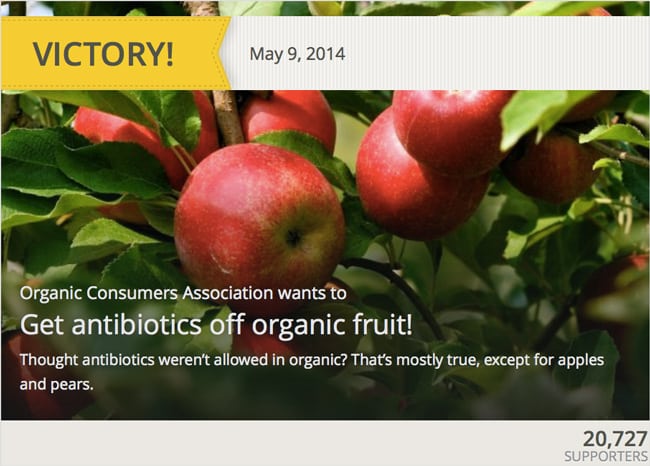 The Organic Consumers Association submitted a total of 74,845 petition signatures and unique comments, including 20,000 plus signatures gathered through Causes, demanding that streptomycin be removed from the list of synthetics allowed in organic products. Under this massive consumer pressure, the NOSB acquiesed. USDA Organic is now 100% antibiotic-free.

And that leaves the Organic Consumers Association in a plum position. They’ve flexed their advocacy muscles, shown they can get things done, and made their supporters feel empowered. Nearly 75,000 people participated in this victory. A success like this will absolutely boost their end-of-year fundraising campaign.

Any organization that does advocacy in a significant way should first have in place an integrated CRM (Constituent Relationship Management) system that tracks all advocacy action and gathers supporter information. If this is the heart of your mission, you may want to go with a system like Salsa which specializes in advocacy (our choice when the ACLU of Delaware requested a website/CRM solution).

Both CiviCRM and Salesforce can also adapt to advocacy needs and are so robust, scalable and affordable, that they’ll beautifully manage all data for your operations.

There are many other options as well. CRMs are simply invaluable for indexing how your organization is doing ramping up supporters’ level of engagement—from signing a petition, to attending events to eventually donating money to your cause. They allow you to mobilize and tap your pool of supporters for this action and actions to come.

While we highly recommended hooking yourself up with a CRM system for a variety of reasons—it’s not an absolute prerequisite for launching an advocacy campaign. 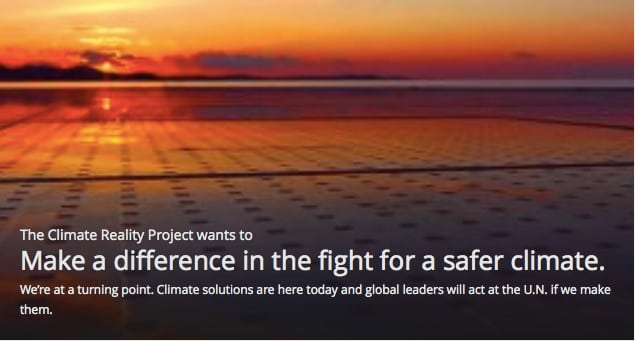 Change.org is a smashing little advocacy platform that whips up petitions and other action guides like nobody’s business. Care2 is also a great option, as is Causes, which integrates nicely with Facebook and is built to support advocacy and fundraising. (Most of the campaign images in this article were posted on Causes.)

The icing on the social progress cake is that these platforms will usually let you download all of the signators’ emails. This is a fantastic and powerful way to build your support base from people you know really care about the issue at hand. Learn more here.

When a supporter consistently sees that you’re advocating on behalf of an issue they care about, and that your actions are making a real difference, they’re much more likely to open their wallet and make a financial contribution. OR even get more involved as a volunteer or board member. 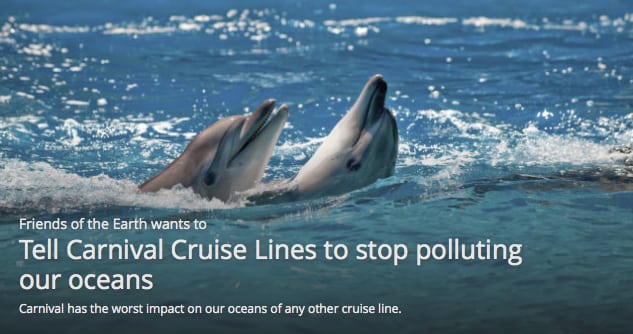 The best part is that anyone can do it. Even a tiny organization. Just make sure that you’re following all the online campaign best practices. All the tips included in this article on successful fundraising campaigns are applicable to advocacy campaigns as well.

Finally, it should be mentioned that while studies have shown that people can feel bombarded with some kinds of messaging from a nonprofit, this saturation point does not extend to advocacy invitations. The more opportunities you give for people to make a difference, the greater the response.

So peruse Change.org, Causes and Care2, take a look at the campaigns that have been most successful, and explore the issues that might make for a great campaign for your organization. Then go change the world! Even if it’s just a tiny corner.

It’s what we call a win-win-win situation.